Throughout the past few weeks, I’ve had a number of conversations with people who are not Catholic or Christian…with atheists, with Satanists, with agnostics…with those who outright hate organized religion and those who are just suspicious of it.

Some of those conversations have been openly hostile, others have been vaguely mocking, and a few have been even curious, but there’s one thing they all have in common.  They all have made (faulty) assumptions about why I am a Catholic.

So, I’m here to set the record straight…in my next few blog posts I’m going to share my truth behind the many misunderstandings that have been leveled at me.

“You’re Only Catholic Because You Were Raised That Way”

It’s true I am a cradle Catholic.  My mom was raised by a strong Catholic family and I find myself still learning from the lessons she learned at the faithful, loving hands of my grandfather.  My dad converted to Catholicism (from “nothingism”) after I was born.  They were not perfect parents, but they demonstrated (and continue to demonstrate) for me more than just what it means to be Catholic – they have shown me what it means to be a good person, a happy person. 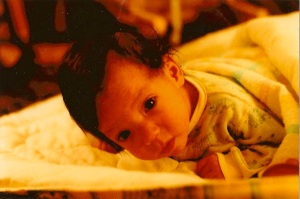 But wasn't I a cute Cradle Catholic??

I teach Confirmation and one of the most common themes that teenagers are taught during the preparation for this sacrament is that it’s the moment when they become an “adult” in the Church.  Confirmation, they’re told, is the time when they choose for themselves the faith that they’ve been taught by their parents, godparents, and others.  I think – and have told my Confirmation teens – that this is a line of bull.  There is no magic moment when you become an adult in the Church – and there certainly is not one moment when you can separate yourself from the teachings of your parents and be Catholic all by yourself.  Here’s why:

We can’t separate ourselves from our history.

My history, all of the life experiences that I’ve had up to this point in my life, make me who I am.  That’s a developmental truth – our environment influences who we become.  So yes, part of the reason I believe in Catholicism is because I was raised in a Catholic environment.

“Clearly you’ve never thought for yourself or researched or studied forms of government.  The only reason you think democracy is best is because you were raised by parents who believed in democracy.  If you bothered to think and use your rational brain, you’d see that democracy is simply a tool used to control the masses and (fill in any other form of government here) is better.”

So why do we argue the same thing about faith?  Of course part of the reason I’m Catholic is because of my environment – but the same applies to you (imaginary person with whom I am arguing).  Part of the reason you aren’t Catholic is because of your environment.  Maybe you weren’t raised Catholic, maybe you were but found a group of people who were something different with whom you had more in common, maybe you had professors in college or teachers in school who ridiculed faith as uneducated, maybe you had an experience with a person of faith that turned you off from the whole thing…I don’t know what environment had contributed to making you who you are today, but I’m not going to tell you to ignore it.  And your experiences don’t make me wrong.

There is not only one reason why I’m Catholic.

This argument has a fatal flaw and that is in trying to simplify my belief system.  I think it is easier to mock me for my faith or reject my faith if you think I’m simply uneducated – that I’ve just blindly accepted everything I’ve been told in my life and never questioned or doubted or changed my theories or philosophies about anything.  Unfortunately, it’s easy to believe that about me because there are too many people out there for whom that is the case.

Clearly, her nose is too big...and Cinderella's eyes were blue.

I stopped believing in Santa (sorry Mom) and the tooth fairy a long time ago.  I don’t believe (any more) that the woman dressed up as Cinderella at Disney World is really a princess.  I don’t believe that being a Catholic Christian means my life is going to be easy or that I will always have everything I want.  These are all things that I was raised to believe, but after thinking about them rationally, and comparing them with my life experiences and those of thousands of people who have come before me, I’m pretty confident in changing my opinion.

Up next…. You’re Only Catholic Because You’re Afraid of Going to Hell