So in this series of blogs, I’ve been outlining all the faulty assumptions the non-Catholic or anti-Catholic people I know have about what I choose this faith for my own…and I’ve saved the best for last. Of course, by “best,” I mean the one I don’t handle well.

However, when it comes to the subject of this post:

You’re only Catholic because you don’t know how to think critically.

…or any of it’s cousins including “because you aren’t educated”, “because you just don’t know better” or “because you’ve never bothered to think for yourself,” I have a hard time keeping my calm, cool, and reasonable demeanor and start seeing red. 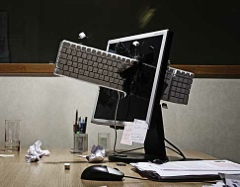 You see, I’m actually a very well-educated individual, and that education was not “sheltered.” Yes, I did attend Catholic school for Elementary and High School (Middle School was public), but then I went to a public university where I majored in English and minored in Spanish and…wait for it…Religious Studies.

My background gave me an understanding of how to examine religion from the outside…but I also in the insider’s view of theology as evidenced by my graduate degree from the Loyola University (a Catholic institution). I can look at religion, God, doctrine, dogma, ritual and sacrament from both inside the Christian perspective and from the perspective of many other religions – or no religion (because athiesm in the United States is it’s own religion).

Oh yes, this is a real thing.

In my Religious Studies courses I studied many major religions including Christianity, Judaism, Islam, Hinduism, and Buddhism. I also studied many of the more minor religions including Scientology, the Raelian Movement, Satanism, Wicca, Navajo religion, Jehova’s Witness, Baha’i and even the Church of the Flying Spaghetti Monster. I took a course that outlines the difference between a religion and a cult and studies some of the significant cults of the United States. I also took a few courses on the history of religion including the ancient near eastern religions.

This means that I know all about the similarities between Horus, Isis, Osirius and Jesus, Mary and God. It means I know that ancient near eastern pagan religions included “eating the god” rituals thousands of years before The Last Supper. It means that I have explored the potential benefits of the 8 pillars of Islam in depth and chosen what about Judaism I can accept (a great mystic tradition, monotheism, and the cycle of sin and redemption throughout the Hebrew Scriptures) and what about the Raelian Movement I reject (pretty much everything).

Of course, it’s not just the Religious Studies background that I feel like I so greatly need to defend when I face the “You’re only Catholic because you’re uneducated” crowd. My extensive background in literature and theories of literary criticism mean I know how to think critically. I’m fairly certain Dr. Klemp would be personally offended and may leave teaching altogether if I had managed to survive 5 college courses with him unable to think for myself!

To claim that I could have studied these topics so extensively and still somehow be “fooling myself” or “not really thinking rationally” is an insult not only to me, but also to those professors who taught me how to think for myself and to the classmates with whom I debated extensively on these topics.

See, here’s the great thing about the wonderful education I received (and will be paying for a long time to come on a church employee’s salary!). It taught me how to think for myself, how to apply critical thinking and analysis techniques to any worldview, how to recognize the ways my own personal bias affects my thinking, and how to put on different lenses through which to see the world.

But here’s the rub…this also means that I’ve thought critically enough to see the flaws in the objectivist worldview that you (imaginary person with whom I am once again arguing) see the world. It means that the lessons about metacognition (thinking about thinking) that my education provided were the same lessons that helped me to reject the anti-religious bias that some of those same professors not-so-subtly included in their lectures and grading.

See, I’ve explored other religions – even felt the draw of the ritual and otherworldliness of religions many Catholics fear (like Wicca) – but ultimately, the things I found appealing about those religions (like mysticism that encourages us to get in touch with invisible realities) or seemed to make the most sense (like ritual that reminds us our bodies speak a language) or even met all of my critera for logical doctrine (like the idea that there is something that connects all living things) – see, the Catholic Church already offers all of those. Every time I encountered a religion that had something I agreed with or something that made sense, I also encountered something that didn’t – except with Catholicism.

What?! Yeah, many people find it shocking when I say that I agree with Catholicism – whole part and parcel – the whole gig. I’ve yet to find something found within the truths held by this religion that I don’t agree with…once I bothered to put my critical thinking cap on and seek out the reasons behind the rituals, teachings, and dogmas.

See, in my experience, the people who use this argument against religion are usually the ones rejecting some of their critical thinking training. They take a few isolated incidents of people who did bad things in the name of the religion and paint the whole religion with the same brush. They reject teachings that might challenge them to change the way they live (like the Church’s teachings on subsidiarity or contraception) without bothering to research and examine the reasons behind those teachings.

Perfect time for a little pro-Catholic propoganda I think. Turns out there’s more to the Catholic Church than scandal and war…something only people who decide to think for themselves rather than simply buying the media spin might discover:

So (here’s me talking to an imaginary person again), how about we keep the insults to a minimum and examine this together? I’d be happy to meet you on a logical and rational field of educated minds and really discuss what it is that so attracted me to Catholicism.

And for all of those who do agree with me – I ask of you 2 things.

The more often we share our faith in the manner it can be received by our audience, the less often we will encounter these misconceptions. Instead, the conversation can change from “You’re only Catholic because…” to “I know you’ve said you’re Catholic because….I’d like to learn more about that.”

Any thoughts? How can you better witness to the reasons behind your faith? Better yet…how about a little Catholic love fest in the comment section here – why are YOU Catholic?