Everyone who knows me – even a little bit – knows that I love to read.  My first word was “book” and I take a book with me wherever I go.  So, what surprises people is not when they discover how much I read, but often when they learn what I read.

I’m a college educated English literature major whose favorite authors are so classic they’re known by initials and last names only:  Dante, Milton, C.S. Lewis, J.R.R. Tolkein, and Shakespeare.  But there has been a seedy underbelly to my reading habits as well: authors whose books are found in the checkout line at the grocery store instead of the college bookstore.  Authors who aren’t really a part of the classic lit canon:  Nora Roberts, Stephanie Laurens, Jude Devereaux, and Johanna Lindsey. 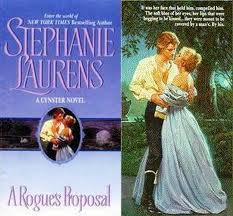 I own this book… {hangs head in shame}

When I first got hooked on romance novels in high school, I loved them because they were quick, easy reads – a nice break from the Chaucer, Stephen Crane, and Mary Shelley I was plowing through in my literature classes.  Unfortunately, like most people with a slightly obsessive compulsive personality, I let things get out of hand, and what started as a vague enjoyment became a compulsive habit.

My husband will tell you that the problem was not in what I was reading, but that I was reading compulsively – all the time – and he would be partially right.  I have a tendency to compulsively read an entire novel in one sitting and ignore everything around me including my needs (eating, sleeping, etc) and the needs of my family.  But what he didn’t know is that those romance novels were causing a bigger problem.

I suppose I shouldn’t be surprised – after all, you are what you read, and what I was reading set up some pretty unrealistic expectations about what “true love” should really be like.

The male leads in these books are everything a man should be.  That’s not to say they’re perfect – there’s usually a sordid past or some emotional (or physical) scarring going on – after all, we want these characters to be believable! Usually they have a problem being a little too demanding, bossy, heavy handed, etc with the leading lady as well.  And then BAM!  They fall in love, and suddenly this guy is falling all over himself to change all the negative parts of his personality to accommodate his beloved.

If he was domineering, he’s suddenly trying to loosen up and let out the reigns a little.  If he was a workaholic, he’s trying to spend less time at work and more time with his lady. If he hated everything that the word “family” stood for, he’s reaching out and rebuilding broken family relationships.

You get the picture.

There’s nothing inherently wrong with these male characters – and they’ve come a long way since the romance novels of the 70s and 80s where the man would rape and kidnap a woman and then somehow win the heart of his passive, innocent lady.

The problem is that when I’m escaping into worlds where the men are constantly trying to prove their love by trying to change, I end up looking at my own husband and wondering why he isn’t quite so malleable.  Suddenly, my unconditional love and acceptance of him as a man created in the image and likeness of God slowly shifts into frustration that he’s not the man I’ve created in the image and likeness of the romance novel character.

You know, if I shave this guy bald, he actually does kind of look like my husband 🙂

These changes in thought process were gradual and it took me a really long time to even notice them, but they were there.  Every time I finished a romance novel I found myself a little irritated with my husband – even if he hadn’t done anything wrong.  I found myself thinking of all the things I wish he would do or be that he wasn’t instead of appreciating the things he does and the person he is.

So, I gave up romance novels – or at least seriously, seriously cut back – so that I could learn to appreciate the man my husband is instead wishing (even subconsciously) that he would be more like the men I was reading about in the romance novels.

These unrealistic expectations followed me right into the bedroom…leading to my second huge problem with romance novels…but that’s a blog for another day.