About a month ago I had a conversation with my 8 year old son that went something like this:

Son:  Mom, I know what the most important thing in the world is.

He didn’t say “duh,” but it was implied.  At this point, I’m feeling pretty good about my Catholic parenting skills.

Son:  Do you know what the least important thing in the world is?

Son:  I don’t know, I thought maybe you could tell me.

My, how quickly those good feelings are replaced with much more familiar feeling that I am blindly groping through this whole raising children thing.

Me: Ummm…well…what do you think it is?

Let’s be honest:  This is a classic parenting technique that should be known as “I have no idea, but am hoping you will talk some more so I can have time to think up a good answer.”

Son:  Maybe money?  But…even if money shouldn’t be the most important, it still is kind of important because we need it to buy food and gas and our house and stuff.

At this point, still floundering for an answer, I’m just grateful he didn’t include video games or Legos on the list of things we need money for.

Son (continuing):  For a while I thought maybe the Devil was the least important…

Wait?!  He’s been thinking about this “for a while?”

Son:  …but even if he’s bad, he’s still important.  I mean, he shouldn’t be important – we should just be able to ignore him all the time.  But, we can’t, and we have to watch out for him – so I guess that means he’s kind of important too.

At this point in the conversation, I’ve ceased trying to come up with a good answer and am just soaking up the kid’s theological wisdom (and wondering why I paid so much for a Master’s degree in Theology when I’m getting totally owned by my 8 year old in a theological debate I wasn’t prepared for).  I really don’t want him to stop, so I make an intelligent response intended to encourage him to continue and affirm the thinking he’s done so far.

Son:  So…I guess I think that the least important thing in the world is TV.

Me: {fumbling} Yeah…okay…I think you could be right about that.

Son:  So, Mom? I have another question…

Dear Lord, please, not another one.  I’m still processing through the first one!

Son:  Can I have some yogurt for snack?

And just like that, it was done.  I was reeling, and he had–the way only an 8 year old can–moved on.  My husband and I spent a long time talking about that conversation.  We felt equal parts awe, pride, and confusion at how we ended up with a kid so dang smart.  We had been tossing around the idea of pulling the plug on our cable (for financial, not philosophical reasons) and made the decision that night.

And then we got busy – and promptly forgot about our son’s great insight and our decision.

This weekend, the issue came up again – not because of any great theological intuition, but because we found ourselves unable to watch the first Packer pre-season game due to a dispute between the local NBC station and our cable provider.

We watched the game on Telelmundo.  I taught the kids to yell “Throw the flag!” in Spanish whenever the refs missed a call. ¡Tire el pañuelo!

On Saturday, we went to the hardware store, picked up a digital antenna and after a brief scare that the soffit was not going to hold up my husband (who would now like to be referred to as Bob Villa), it was installed.

I mentioned to the kids at dinner that night that we were getting rid of cable which meant no more DVR and no more On Demand.  The 8 year old looked at us, confused…

Son:  So, we’re switching to Dish then?

Once again, I find myself wondering when he turned from a 3 year old who got all of his worldly knowledge from me into a self-sustained young man who knows things we didn’t tell him.

We’re not going crazy here folks – I mean, it may be the least important thing in the world, but we’re not ready to give up our electronic entertainment completely.

At this pronouncement, my genius 8 year old, the one whose deep insights into the nature of good and evil prompted this decision, burst into tears.  He didn’t want to give up the Lego Ninjago cartoon he likes.

At that moment, as I comforted him and reminded him we’d still have Doctor Who on Netflix and the MacGyver DVD set, I knew we made the right choice.  I don’t want my kids to be that emotionally dependent upon TV. 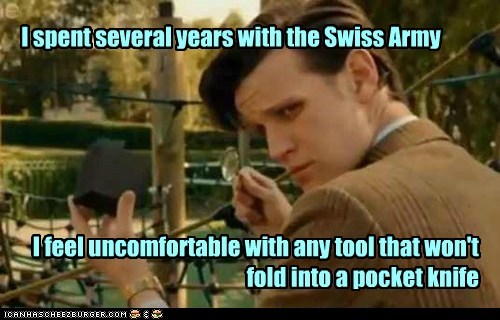 Why yes, I did find a meme with both Doctor Who AND MacGyver references…

That moment also righted my parenting world again.  The 8 year old may have great insight and be well on his way to having the right values, but he still needs his parents to implement the decisions that will bring those insights and values into practice in the daily life of our family.