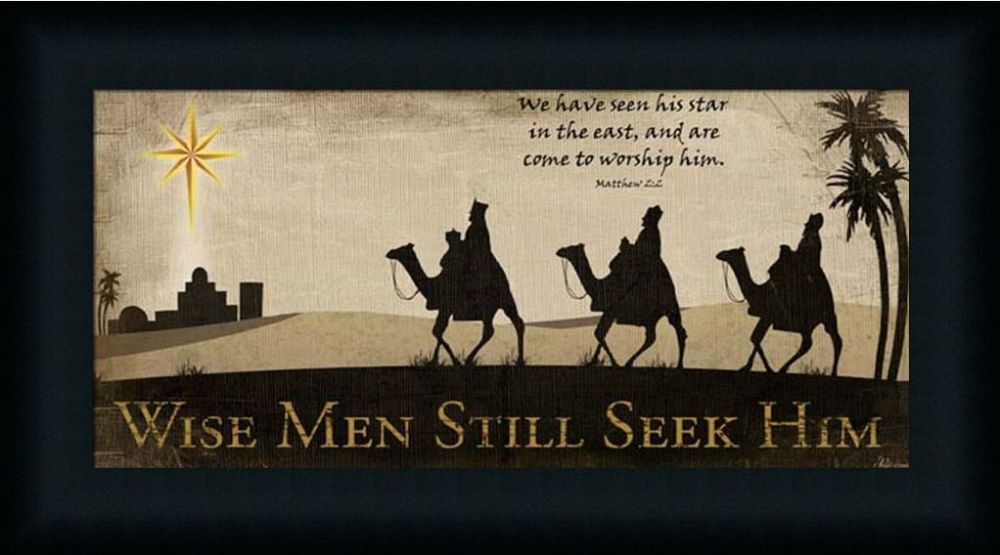 When I was a child, the magi’s story captured my imagination.  I remember my parents drawing out the Christmas season through the Feast of the Epiphany.  Presents stayed under the tree, decorations stayed up, the Christ candle at the center of the Advent wreath was lit, and even Christmas music echoed in the halls of our home all the way through January 5.  Without fail on the day after Christmas, the wise men would begin their journey from the far east (sofa table) traveling a little each night while we slept as they made their way to Bethlehem (next to the fireplace). 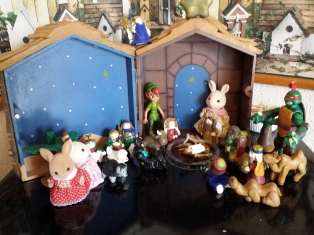 One nativity in our house this year – with wise men, wise Calico Critters, wise ninja turtles, wise Batman, and wise Peter Pan… all seeking Him.

My adult imagination was sparked in a whole new way as I read how the early Church fathers interpreted the magi story in light of Old Testament prophecy:

Justin cites Isaiah 8:4, where the prophet predicts that “before the child knows how to call ‘My father’ or ‘My mother,’ the wealth of Damascus and the spoils of Samaria will be carried away by the king of Assyria.” For Justin, the magi were priests of an eastern cult and practitioners of magic and astrology. The wealth of Damascus and spoils of Samaria represented the sorcery and idol-worship that the pagan magi gave up when they worshiped Jesus. The magi’s visit to the crib was thus their moment of conversion and the renunciation of their misguided, idolatrous practices.*

According to Origen, after the star appeared to the magi, they noticed that their magic spells faltered and their power was sapped.  Consulting their books, they discovered the prophecy of the oracle-reader Balaam, who saw a rising star “com[ing] out of Jacob” (Numbers 24:17) that indicated the advent of a great ruler of Israel. The magi thus conjectured that this ruler had entered the world. So, the magi traveled to Judea to find this ruler, and based on their reading of Balaam’s prophecy, the appearance of the comet and their loss of strength, they determined that he must be superior to any ordinary human—that his nature must be both human and divine.*

According to Irenaeus, the magi offered Jesus myrrh (used for anointing corpses) to indicate that he was to die and be buried for the sake of mortal humans, gold because he was a king of an eternal kingdom, and frankincense (burnt on altars as divine offerings) because he was a god.  As the first visitors to recognize who this newborn child was, and what his birth would mean to the whole world, the witness of the magi was not insignificant to these controversies. Their three gifts seemed to demonstrate their understanding of the three distinct persons who shared a single “nature” within the Trinity.*

The wise men did not simply seek Him, they were the first to recognize Jesus as messiah.

As the Magi strove to find the newborn king, may the Feast of the Epiphany find us not only seeking out Christ each day of our life, but actually recognizing Him as Priest, Prophet, King, and Messiah.

As the Magi renounced their magical idolatrous practices in the infant face of God incarnate, may we renounce whatever worldly idols have thickened the veil between us and Christ.

As the Magi blessed the Holy Family with their humility and homage, may our families be blessed humility and may we keep the adoration of Christ at the center of everything we do this year.

* From: The Magi in Art and Literature by Robin M. Jensen