It’s taken me forever to find time to finally write a blog.  But, here I am!!  And, I wanted to write on a topic that’s been on my heart and mind a whole lot over the past few years, probably since my first child was born almost 4 years ago.  And, in recent days, it seems to be a topic that keeps popping up over and over again in conversations and Catholic circles in which I run.

Choosing schooling for our children.

It’s been out there, hanging in the marital and family atmosphere since my son was born.  When knew the days would come when he would be old enough to have to begin formal education and we would have to decide which route we wanted to at least begin with.  And, when it’s your first child and you have no experience with any type of school one way or the other, it’s overwhelming to think about.

I went to all Catholic school, from kindergarten through college.  Every minute spent in a school uniform (well, up until college), nuns as some of my teachers, retreats & Mass as a regular part of our curriculum.  I was not homeschooled ever, though one of my sisters and one of my brothers both were for a short amount of time.  Those same two were the only ones in our family who ever attended public school.  I had some public school friends from work and activities that I did outside of the school, but not many.

I knew plenty of homeschoolers especially through our family prayer group.  I went to college with A LOT of homeschooled people.  In fact, I am married to someone who was homeschooled for a large part of his education (and, incidentally, who received his college education through the seminary).

But, it was in my work as a youth minister that I really got a more complete picture of what educating kids within Catholic families looked like… 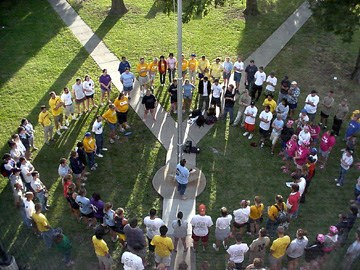 What was the one thing that was the same about all of them?  They were all, every single one of them, CATHOLIC KIDS who came from CATHOLIC FAMILIES.

My point is this:  There is SO MUCH pressure and so many opinions in Catholic circles these days that there is a “preferred” or “better” or “more Catholic way” to educate your children.  And, if you haven’t figured it out yet, I think that’s a bunch of bull.

Some of the very best families I ever got the joy of working with were families who sent their children to all public school from kindergarten on.  And, their kids have turned into active members of the Church, volunteers in community organizations, teachers, lawyers, business people, missionaries, parents, actors, whatever you can think of!

And,   yeah, there are some public school students who fell off the deep end, who made some bad choices, who are still trying to get their lives together, and some who don’t even go to church anymore.

And you know what?  All those same things written above can be said about homeschooled kids and Catholic schooled kids, too!

Do you see the pattern here?  The best way to educate your Catholic kids in your Catholic family is WHATEVER YOU DISCERN TO BE BEST.

God has given each of us a responsibility as parents to grow, learn and understand who are children are and what the dynamics of our family and marriage are.  He’s also given us brains in our heads to use that knowledge to figure out what form (or forms) of education will work best within those contexts and will be most fruitful FOR US and ultimately, for the greater glory of His kingdom.

So, please, my dear Catholic friends who are in the same boat as we are, beginning to make challenging and stressful decisions about educating our children, let’s all take a collective deep breath and worry about the kids God has given to us and NOT the kids who are being raised in another family.  Let’s stop passing judgement that one way of schooling is “the best” or at least “better” than another way.  Let us stop looking down on one another for making different choices in this matter, even if it’s “not the choice we’d ever make.”  Let us love and support each other not only as Catholic parents who are trying to do our best in this crazy world, but also as fellow sojourners traveling together towards Heaven.