As you’re probably aware of by now, I’m a Catholic.  It’s not just a fitting-in sort of label for me, like a 3rd generation 20% Irish-person around St. Patrick’s Day.  (Yeah, I said that.)  My being a Catholic is part of who I am, how I define myself, how I hope to portray myself.  I strive for it to affect literally every part of my life – the fact that I fail constantly is irrelevant here.  As I try to live out my faith and my identity as a Catholic, I am always on the lookout for that community of Catholics to share my life with – friends who share our faith, values and priorities.  I want to know I’m not alone in my challenge, and I can be there to support and lift up others who are trying to navigate the narrow road.  Having a community of Catholic men, women and families around us has been a humongous blessing & help to myself and my wife – and of course it is!

We all know how important friends are to teenagers.  This is the time of life when teens are beginning to break from their family.  They like to believe they are independent, but they are so, so far from real independence from family and parents.  (see part 1 for how important adults are)  A huge part of this break is the friends teens have.  Teens quite often list friends as more important than family.  This may or may not be the case – and that doesn’t really matter for this discussion – the apparent truth of it matters.

END_OF_DOCUMENT_TOKEN_TO_BE_REPLACED

Note: This is part 1 of a 3 part series on morality in teens – introduction & explanation can be found here.

And neither do teens. More than us, probably, they want to feel a part of something – they want to know they’re not going it alone.

More than teens realize, and more than adults know – teens need us. And I don’t mean that we are needed for our money or housing or food or clothing. I’m talking about being that reliable, safe, trustworthy, accountable, old-steady, even-steven sort of partner for a teen.

Teens need at least one adult they can rely upon and trust.

END_OF_DOCUMENT_TOKEN_TO_BE_REPLACED

Why are we so infatuated with coffee or preaching or music, if it isn’t the most important thing?  Are we that shallow? Why do we lose the point in the midst of all the things trying to make the point?

We know when we have a good cup of coffee.

Things like coffee can be judged and measured. We know when we have heard a good homily because we have an emotional or intellectual reaction. We know when the music works for us because our toe taps, and we are tempted, dare I say it, to sing and pray along.  We know when we walk into a church, look up into the mosaic covered dome and utter “Oh my God” (not at all in vain) in reaction the undeniable beauty before our eyes.

Thus, we put more importance on good music, entertaining preaching (did I laugh?), and coffee because when those things are good, we know we got something out of Mass.  When those things aren’t good we often walk out of Mass and don’t know that we were affected.  We may even think nothing has happened. END_OF_DOCUMENT_TOKEN_TO_BE_REPLACED

I love being Catholic.

But, if you are reading this blog, this shouldn’t be earth shattering information to you.  I’m writing a Catholic blog – a blog that’s pro-God, pro-Catholic Church, pro-life, pro-ministry, pro-family, pro-pro.  So, it should be pretty clear…  I love being Catholic.

I have never really explained why I love being Catholic, though.  And, to be honest, it would probably take years worth of blogs to explain all the things I love about the Catholic church, my Catholic faith, and my Catholic upbringing. END_OF_DOCUMENT_TOKEN_TO_BE_REPLACED

There is a plague that has run rampant in Catholic Churches for years. Few have sought to end this scourge. Most have just accepted this fact as an unchangeable reality. The elderly sigh and talk about the good ol’ days when things were different. The young don’t bother to come to the Church for this anymore because they can get fancier, flashier versions somewhere else. The world has become so relativistic that some even challenge the notion that there is good and bad of this fundamental substance.

Of course, I’m talking about coffee.

Church coffee is notoriously bad. When our bulletin folders are in the office, the coffee is so thin you could read the bulletin through it. For some reason, when particular people make coffee, there is this oily film covering the top. Some days the coffee is so wretched to call it burnt sludge would be an insult to burnt sludge.

Frustrated and deeply desiring a “real” cup of coffee, I made a desperate move. I went to Target and purchased an $18 coffee maker, $3 worth of filters, and an $8 bag of good beans. I brought them back to my office and brewed myself some good coffee. It was magnificent. END_OF_DOCUMENT_TOKEN_TO_BE_REPLACED

I spent most of Thursday afternoon woodworking in my basement. Seriously.

Besides constructing some made-from-scratch coat hook racks for the laundry room, I spent the afternoon refinishing some chairs for our office space at the house.  I spent almost 3 hours sanding and priming. I honestly can’t believe I sat in one place for 3 hours doing anything, much less something so mundane.

Turns out, I loved it.

Not because I am trying to be more like J.C. (cue the Meet the Parents quote), but

because my focus was totally and completely centered on one thing. While I was working, all worries, concerns, and future work melted away.  I was left with the chair in front of me and piece of sand covered paper.  I instantly and clearly saw whether I was accomplishing my goal or not.  At the end of the three hours, I had two sanded and primed chairs.

I also had 180 minutes of Fr. Mike Schmitz homilies listened to.

Fr. Mike runs the Newman center at University of Minnesota Duluth.  He speaks at various youth ministry events all over the country.  And his homily caused me to weep while I distributed communion during the closing Mass of our Parish Mission last Lent.  He is a gifted speaker and all around awesome dude.  Because his homily is recorded and podcasted each week, one click and I am challenged, inspired, and moved.

Next time you have some mundane moments (driving, waiting, watching a middle school volleyball tournament) give Fr. Mike Schmitz’s homily podcast a try. It will be worth your time.

My Girls at Easter. It was kinda cold.

Last week I wrote about taking my kids to Mass, about being the monkey bars for my two year old to climb on for about 46 minutes of the hour. I was a little worried that I was going to offend some parents who either have absolutely no problem with their children at Mass (you know, “that family”), or that I was going to offend the people who have it even rougher, (the other “that family”). We sat next to the other family at Christmas this year. Despite chocolate chip cookies (my kids were wondering where their cookies were), countless books, and the kind of toys that are perfect for pounding on a wooden pew, these kids were a wreck and had a tough Mass. I felt for the parents and spent a good portion of my post communion time praying for them.

In fact, I did get one email with some pretty strongly worded suggestions – from my wife. END_OF_DOCUMENT_TOKEN_TO_BE_REPLACED 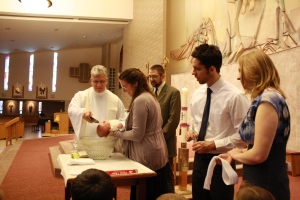 I may be a little bit of a Star Wars fan. There may or may not have been a song from Episode 4 played as the recessional song at my wedding. But I won’t tell. I may have named my son after Luke Skywalker. Ok, I didn’t really – it was for St. Luke the Evangelist – but it is nice that it fits for multiple purposes.

END_OF_DOCUMENT_TOKEN_TO_BE_REPLACED

I made this statement the other day after someone was commenting on the prognosis of another person who is fighting cancer.  Needless to say, I was met with raised eyebrows and sideways glances.  And, you’re doing it right now, too.  I can just feel it.

What?  It’s a true fact.  We’re ALL…GOING…TO….DIE!  There’s a 100% chance of it.  That person fighting cancer just has a better idea of when it’s going to happen than you or I do.

But, this blog isn’t about death…

Some people would read that statement above and say, “Wow, she’s a negative person.”  In fact, people have said it to my face on many occasions.  But, I find this really weird because I’m not being negative.  I’m being factual.  I’m stating a REAL truth.  The fact that all of us, someday, WILL die is not a negative thing.  In fact, the sooner we grasp this reality, come to terms with it, and understand that death is actually a marvelous thing (hello, HEAVEN is on the other side!), the sooner will enjoy and appreciate our life in a more meaningful way.

Again, this blog isn’t about death…