It’s the changing of the seasons.  And, no.  I’m not talking about the weather-related changes from the warmth and sun of the summer to the coolness and colors of the fall. 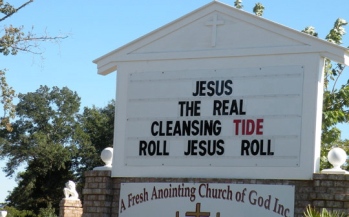 Supporting a team while keeping things in perspective

No, I’m talking about the changing of the sports seasons from baseball to football.  Or, as most people understand it in my state, from “not football season” to “football, y’all.”

(NOTE:  I’m not saying that it IS the greatest state for it, I’m saying that many in this state might argue such.  So, anyone from Texas, Buckeyes, Californians, Sooners, and whoever else disagrees need not send me hate mail or comments touting your state’s glories.  I know there’s lots of great college states out there.)

Anyways, I have to admit that, yes, i DO in fact love football season.  Maybe it is because of the changing temperatures and getting to break out my jeans again.  Maybe it’s the beat of a drum line on a Friday night, echoing across high school campuses.  Maybe it’s the tailgating, wearing your team’s colors, and uniting with fans of the same team, even if you don’t know each other. END_OF_DOCUMENT_TOKEN_TO_BE_REPLACED