After the initial shock of the news wore off, the questions started.  While we here at The Catholic Realist are not cardinals, canon lawyers, or papal historians, we did some homework and got answers to a few of the questions running through the minds of our Catholic brothers and sisters today.

**Edit: As we come across more questions being asked, we’ll add them to the list.**

A.  Yeah, that was my first question too.  I woke up this morning and saw the following on my Facebook news feed:

BREAKING NEWS: Pope Benedict announces he will be retiring.

At first I thought it was a joke.  I thought maybe I had been in a coma for the past 2 months and it was really April 1 – and someone was pulling a bad April Fool’s Joke.  Then I read the Pope’s letter announcing his resignation.  Turns out, it’s not a joke.  Pope Benedict XVI is renouncing the ministry of Bishop of Rome, Successor to Saint Peter as of February 28, 2013.

“If it should happen that the Roman Pontiff resigns his office, it is required for validity that he makes the resignation freely and that it be duly manifested, but not that it be accepted by anyone” (Canon 332, No. 2).

It’s rare, but there is a precedent in the two thousand year history of the church. END_OF_DOCUMENT_TOKEN_TO_BE_REPLACED

I recently found myself in a conversation with a friend who is struggling with depression and feeling overwhelmed. At work, with his family, in his marriage, keeping up at home…he has been sinking under the weight of all of his struggles and responsibilities. At one point in the conversation I encouraged him to have hope that things were going to be okay.

He got instantly angry.

“What do you mean? How do you know it’s going to be ok? Are you going to get me a new job? Can you fix the broken relationships in my life? I cannot just ignore the problems and hope they’ll just go away. You may live your life that way, but I can’t function like that.” 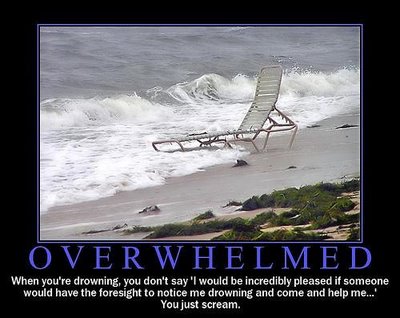 In that moment, I had an opportunity to share the reason for my hope…to explain how my faith gives me patience to wait for God’s timing in my life. To witness to the ultimate hope in Christ and the promise of eternal life that keeps me going through the hard times. To connect with the Paschal Mystery of the life, death and resurrection of Christ that we just celebrated a few weeks ago. To show him how my Christian faith has totally transformed my life.

But I didn’t do any of those things.

END_OF_DOCUMENT_TOKEN_TO_BE_REPLACED

It’s the most wonderful time of the year!
When we sacrifice many things
And forgo the chicken wings

And maybe give up beeeeeer!
It’s the most wonderful time of the year!

The majority of Catholics don’t exactly share my sentiments about Lent.  We generally have childhood memories of cheese pizzas and mac & cheese on Friday nights (or, as with our house, orange roughey or tuna).  We remember somber days, going to Stations of the Cross, venerating the Cross and extra long Palm Sunday Masses.

My most vivid Lent memory from childhood was the hardcore parental move of NO TV for all 6 weeks of Lent.  Yup, all of it, including Sundays.  I don’t know how my parents didn’t go nuts with us 5 kids and all our “boredom.”
END_OF_DOCUMENT_TOKEN_TO_BE_REPLACED