The Church as a whole has seemed overjoyed and hanging on every move of our gutsy new Pope, Francis. The fever ran high immediately: a Jesuit Pope? Just earlier that day I was having a conversation with someone about how there’ll never be a Jesuit Pope. Maybe not never, but not in my lifetime, that was I oh so convinced of. And then he chose the name Francis – it took a while to really get an answer about which St. Francis he was taking the name from – there are 3 pretty big name St. Francises (is that really the plural of Francis?) in our Church history. It came out later that he chose it after Francis of Assisi, for his love of the poor.

St. Ignatius of Loyola gave Jesuits 2 mottos: “for the greater glory of God” and “sinners yet called”

On top of all of that, he is an American pope – not from the USA, as we so easily think of America, but very clearly, he is a Pope from the Americas. And yet, his family has Italian roots – returning the Papacy to where it had been for hundreds of years prior to Blessed John Paul II.

Ok, so we’ve got an Italian and an American Pope, a Jesuit who took the name Francis.

Everyone got this guy figured out yet? Me neither. And my guess is, the second you think you’ve got Pope Francis figured out, you’re just begging to be proven wrong. END_OF_DOCUMENT_TOKEN_TO_BE_REPLACED

After the initial shock of the news wore off, the questions started.  While we here at The Catholic Realist are not cardinals, canon lawyers, or papal historians, we did some homework and got answers to a few of the questions running through the minds of our Catholic brothers and sisters today.

**Edit: As we come across more questions being asked, we’ll add them to the list.**

A.  Yeah, that was my first question too.  I woke up this morning and saw the following on my Facebook news feed:

BREAKING NEWS: Pope Benedict announces he will be retiring.

At first I thought it was a joke.  I thought maybe I had been in a coma for the past 2 months and it was really April 1 – and someone was pulling a bad April Fool’s Joke.  Then I read the Pope’s letter announcing his resignation.  Turns out, it’s not a joke.  Pope Benedict XVI is renouncing the ministry of Bishop of Rome, Successor to Saint Peter as of February 28, 2013. 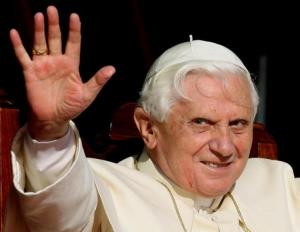 “If it should happen that the Roman Pontiff resigns his office, it is required for validity that he makes the resignation freely and that it be duly manifested, but not that it be accepted by anyone” (Canon 332, No. 2).

It’s rare, but there is a precedent in the two thousand year history of the church. END_OF_DOCUMENT_TOKEN_TO_BE_REPLACED